National Volunteer Week – a great chance to thank your volunteers 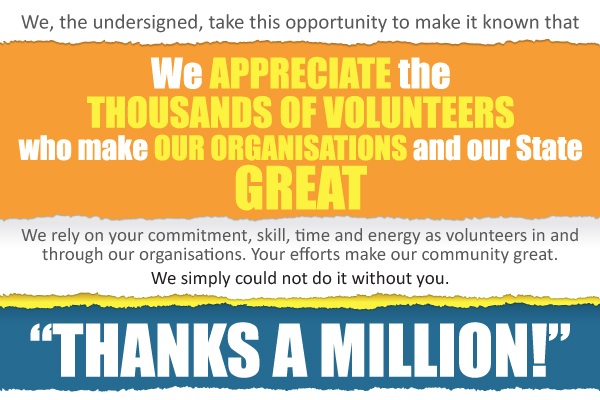 Next week (13-19 May) is National Volunteer Week 2013 – Australia’s largest celebration of volunteers and volunteerism.

And according to Volunteering Victoria, one of their NVW initiatves has “gone viral” in less than a week, with more than 100 leaders of organisations with volunteers signing up to publicly declare thanks for their volunteers.

The aim is for every CEO, General Manager or Executive Director (or Chairperson) of every organisation that has volunteers to put their name to a public appreciation ‘pledge’ demonstrating the extraordinary diversity in services, programs, charities and causes volunteers make possible.

Thanking your volunteers is a powerful act

“Saying thank you is a simple but powerful act,” said Volunteering Victoria CEO Sue Noble.“For National Volunteer Week we thought we’d see how many leaders would step forward and commit to a simple thank you and public acknowledgement of their volunteers through our Victorian Leaders’ Thank You Petition.”

“We wanted leaders everywhere to take a moment to consider what it might be like without their volunteers and how they contribute to work of each organisation. Without volunteers we would not have the rich community we do and most of the organisations on the petition would simply not exist– or if they did, their activities would be severely curtailed,” said Ms Noble.

One organisation, Barwon Health, went to the extraordinary length of getting each and every member of the Board, senior executive team and volunteer management team to send in signatures.

The on-line petition was activated with a call to volunteer managers and coordinators to download this letter from Ms Noble, co-sign it, and pass it on to their organisation’s CEO. This led to the first flow of signatories on the petition. CEOs, Board chairs and executive directors are now contacting Volunteering Victoria directly to be added. Each new signatory is announced via social media – along with their message of thanks to be shared with their volunteers via Facebook or Twitter.

If your organisation is Victoria-based and not yet one of the signatories, you can download this letter from Volunteering Victoria, and ask them to join.

Or if you’re the leader in your organisation, and you want to join your colleagues who have already signed on, email a.patterson@volunteeringvictoria.org.au and they’ll add you (and let everyone know via Twitter and Facebook that you have publicly thanked your volunteers, and that you recognise their work!)

And if you’re not in Victoria, that’s no reason not to take the opportunity to ask the leaders in your organisation to consider how volunteers contribute to your success, and say a big THANKS to them!