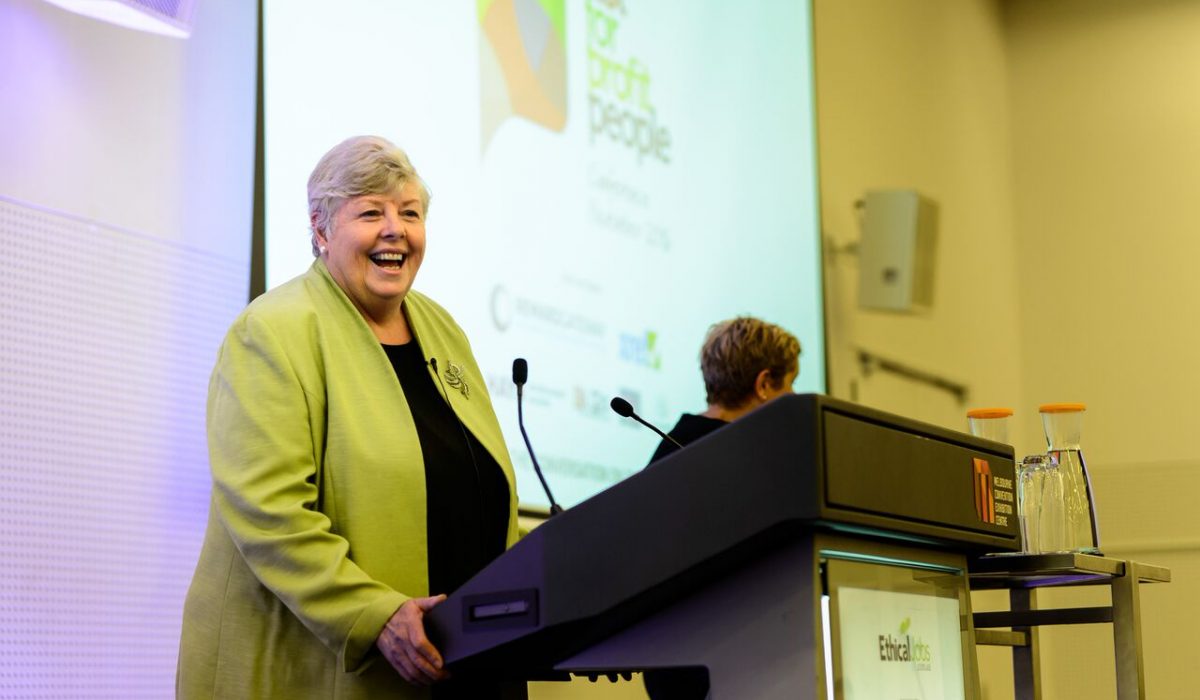 We’re still coming down from the high of the 2016 Not-For-Profit People Conference – two days, 35 speakers and 600 attendees from across the NFP sector and beyond. And so many fantastic ideas and connections formed!

If you were lucky enough to attend, thanks for coming. We hope you came away with some new ideas and connections that will help you make an impact in your organisation – and in turn help your organisation make a bigger and better impact.

Didn’t make it to this year’s conference? We hope you’ll be able to join us in 2017. But until then, here are five of the lessons we learnt from the 2016 Not-For-Profit People Conference:

1. Don’t hide your vulnerability as a leader

Oxfam Australia’s Chief Executive Dr Helen Szoke leads one of Australia’s most high-profile organisations, so when she opened the conference with a story about a very public mistake of hers, the 500-strong crowd was all ears.

Dr Szoke shared how she delivered one of her first speeches as Oxfam Australia’s head – only to discover that it was the same speech her predecessor had given to the same audience a year earlier.

Far from admonishing herself, Dr Szoke said it’s OK for leaders to demonstrate vulnerability. But in doing so, they must avoid being “wishy-washy” and clearly communicate to staff how they plan to address those shortcomings or mistakes.

2. Be social with your staff

Sometimes, getting to the truth of what your staff really think can be difficult – which can be a problem, since unspoken grievances can prove poisonous to your organisation.

Life Without Barriers’ National Director of Practice and Quality Mary McKinnon has one solution: Get social.

She says leaders can foster more open communication amongst staff by building social situations into the culture of the organisation.

That’s because people naturally let down their guard in social settings – so you might find your staff communicate far more openly with you over a coffee meeting at a local café or during drinks on a Friday afternoon than in a stale-air-filled boardroom.

3. Deliver feedback in real-time, not once a year

GE Australia‘s solution is ‘real-time insights’, a system by which any staff member can provide feedback to anyone else in the organisation – about anything, at any time. It’s entirely opt-in, but participation is strongly encouraged and incentivised via simple reward schemes.

GE Australia’s HR leader David Arkell – a 30-year veteran of corporate HR – said the organisation doesn’t track these insights, nor do they formally note participants. So how do they know it’s working?

“[We] don’t – you have to trust in the process,” he said, adding that GE may decide at a later date that if the system doesn’t work, it will change tack accordingly.

Ailsa Leacy and Melissa Volp from YWCA Queensland made a similar point in their discussion of YWCA’s new People and Performance framework, which emphasises the value of regular, structured feedback sessions between managers and their staff. The sessions have transformed the way their teams work.

4. Consider the mood of your organisation

That was the question posed by positive psychology expert Michelle McQuaid, who cited research that shows a huge 20 to 30 percent of an organisation’s performance is determined by the mood of staff.

That’s because a positive mood broadens the mind, builds resources and decreases stress – which means that being more intentional about the mood of your organisation makes sense for everyone.

5. Remember: anything is possible

In the closing keynote on day two, former Victorian police commissioner Christine Nixon shared the story of her long and textured career to a captivated crowd.

No stranger to hearing the word ‘no’, Christine’s career could have been over before it’d even begun if she’d listened to her policeman father, who told her women had no place in the NSW police force.

And yet, many years later, it was her father who suggested Christine should apply for the role of Victoria’s chief police commissioner – a job opening she hadn’t even considered.

The lesson? With a clear vision and hard work, you can change people’s minds, overcome doubters and do the seemingly impossible. In Christine’s own words, if you back yourself to succeed, “What’s the worst that could happen?”

Did you attend the 2016 NFP People Conference? What was your favourite take-away from the two days? We’d love to hear from you in the comments below!